Phnom Penh, Cambodia – More than two years after being arrested for treason, Cambodian opposition leader Kem Sokha has gone on trial just before a crucial European Union decision on preferential trading rights that the grouping has threatened to withdraw over human rights abuses in Cambodia.

Kem Sokha, president of the Cambodia National Rescue Party (CNRP), was arrested in the early hours of September 3, 2017, and later charged with treason, accused of collaborating with the United States to topple the Cambodian government of longtime ruler Hun Sen.

The arrest came as support for the CNRP surged among Cambodians, but the allegations stemmed from a speech the opposition leader had given in Australia in 2013 that had long been publicly available.

In the talk, he spoke of receiving US training on how to build grassroots support.

If found guilty, Kem Sokha faces as many as 30 years in prison.

“The charges against Sokha, namely the claim that he has ‘conspired with a foreign power’ to overthrow the government, has been rejected as baseless by pretty much anyone outside of the Cambodian government,” said Katrin Travouillon, a researcher at the Australian National University who has conducted extensive research on the Southeast Asian nation.

“I categorically deny the charge of ‘conspiracy with foreign powers’ which was brought against me,” it said. “I did NOT commit anything of which I am accused,”

In a message to Al Jazeera, his daughter Kem Monovithya described the trial as a farce that was damaging Cambodia’s image.

“Kem Sokha is innocent and needs to be acquitted,” she said. “His political rights need to be reinstated so Cambodia can get back on track. Let’s move on.”

Hun Sen consolidated his hold on power following Kem Sokha’s arrest, dissolving the CNRP, banning its members from politics and prompting top-level opposition politicians to flee abroad. The governing Cambodian People’s Party (CPP) won all 125 seats up for grabs in the 2018 election, which observers said was a sham.

Kem Sokha himself was released into house arrest in late 2018 and freed in November last year. Shortly afterwards, a judge announced investigations had been concluded.

He remains banned from politics and is not allowed to travel abroad.

While the charges of treason have been largely condemned, Travouillon said, the case had become all about foreign influence and politics. 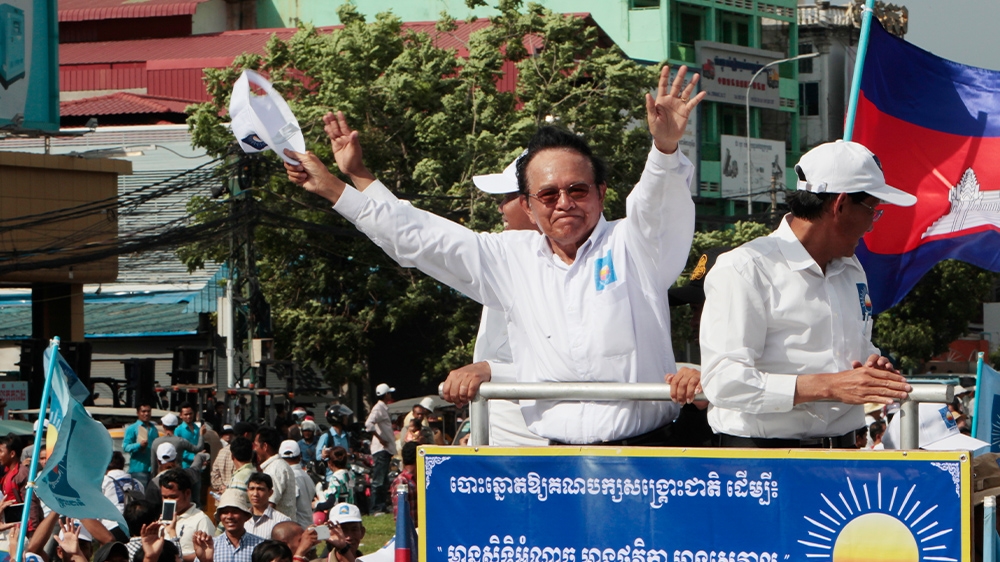 The government has said it has no influence over the proceedings and that the judiciary is independent.

Kem Sokha arrived at the court in Phnom Penh shortly after 7:30am local time (00:00 GMT) on Wednesday, accompanied by a handful of people, and headed up the stairs of the court without looking back.

Hundreds of police and military personnel with rifles guarded the roads surrounding the building.

Only 30 people were allowed to be present at the trial, which will take place over two days from January 15. About 20 supporters gathered outside to lend their support including 74-year-old Sok Yoeung.

“I want to see what evidence they show… I haven’t seen any act of him that shows he betrayed the nation.”

It could be months before the decision is made.

“The authorities are clearly trying to limit scrutiny of this politically-motivated trial,” Amnesty International’s Regional Director Nicholas Bequelin said in a statement, accusing the government of “weaponising” the criminal justice system to eliminate the opposition.

“The gravity of these absurd accusations demands that the authorities uphold the highest standards of fairness and transparency, which requires holding a public hearing. It is essential that human rights monitors and journalists are given unhindered access to the trial.” 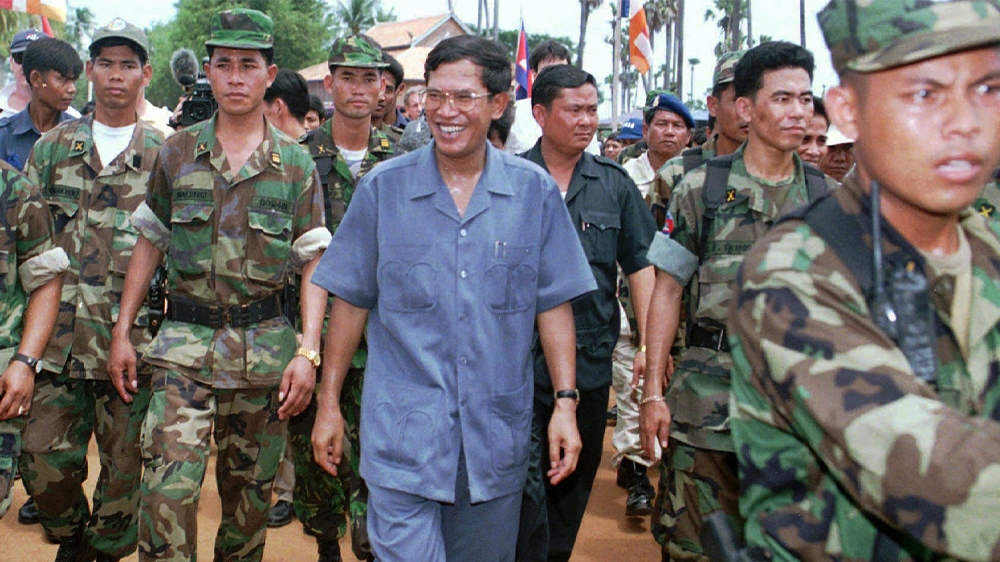 Hun Sen has been Cambodia’s prime minister since 1997 and is one of the world’s longest-serving leaders [File: Ou Neakiry/AP Photo]

Mu Sochua, vice president of the now-dissolved CNRP, said the outcome had already been decided.

“They will find him guilty as charged then proceed with a royal pardon,” she said.

In Cambodia, royal pardons have been granted to high-ranking opposition politicians, including Sam Rainsy. They are often requested by Hun Sen and granted by King Norodom Sihamoni.

Mu Sochua said the next step would be to see how Kem Sokha could return to politics and the CNRP’s future but declined to elaborate.

“It will be an open and shut case,” he said. “This is again going to be a kangaroo court trial.”

But Markus Karbaum, a consultant who has covered Cambodia since 2003, said multiple scenarios remained possible.

“It is hardly possible to predict [what will happen] as there are too many scenarios ranging between a fast acquittal and a conviction followed by either a longtime prison sentence or a royal pardon,” he said.

“I strongly believe that the Hun Sen government and Kem Sokha are currently in negotiations. Only a political agreement behind the stage before the trial can prevent a conviction.” 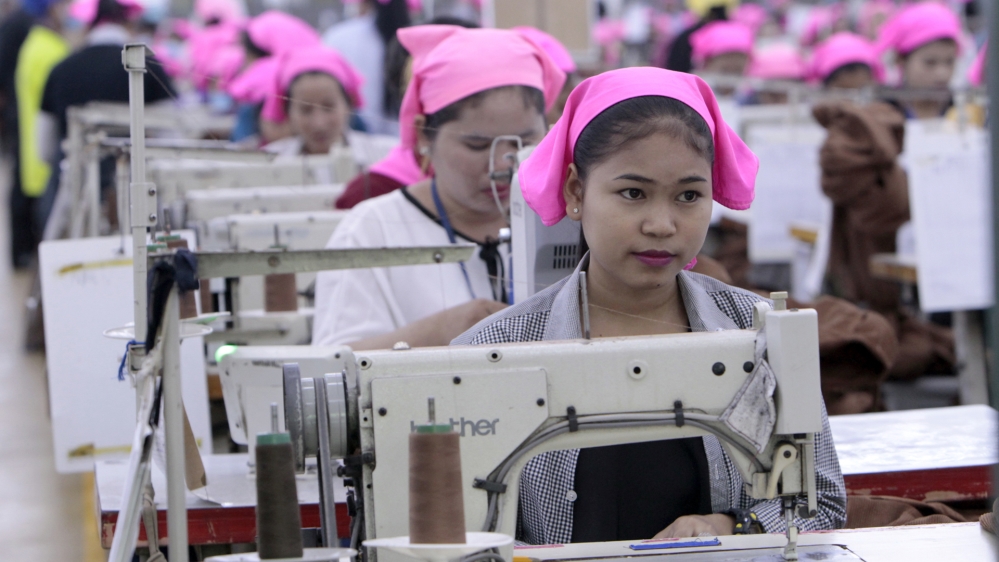 The trial comes at a politically-sensitive time, with the EU expected to announce its decision on whether to withdraw the preferential trade agreement Everything But Arms (EBA) in the middle of next month following the deterioration of human rights in the country. Kem Sokha’s arrest and the opposition crackdown were among the EU’s key concerns when it announced the review.

Karbaum said the EBA decision would have a significant influence on the trial.

“It is the 500-pound gorilla sitting in the middle of the room nobody is able to overlook,” he said, explaining that the trial and the political agreement could deliver the kind of signal the EU needs to hear in order to maintain the EBA. “Just an acquittal is definitively not enough,” he said.

Astrid Noren-Nilsson, a lecturer at Lund University who researches Cambodia, echoed that assessment, but said it was “almost certain” that Kem Sokha would be found guilty, as acquitting him would “undermine the government charge of treason”.

The question, she said, was whether a royal pardon would follow.

“The outcome of the trial is the single most important issue for imminent political developments in Cambodia,” Noren-Nilsson said. “It will both be a key factor in Cambodia’s relations with the EU and the West and possibly a pawn in the lead-up to the final decision in February on the country’s EBA status.

“But the outcome of the trial is not a game-changer. The government has come out as determined to block any effective opposition for the foreseeable future.”